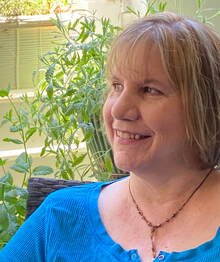 ​First published in Marion Zimmer Bradley's "Sword & Sorceress" anthology, C.J. was bitten by the writer's bug and hasn't stopped since. The Wild Rose Press published her award-winning first novel, "Walking Through Fire" a Scottish ghost romance. She is currently working on the fourth book in the interconnected standalone series, The Fire Chronicles, as well as a new Urban Fantasy starring a kick-ass Time Enforcer.

When her pen isn't scribing, you can find her busily cutting and tracking music for film and television.  With over thirty years of music editing experience, her credits range from "Northern Exposure" and "The Muppets Christmas Carol", to "The Kill Point", "The Following", and ABC's hit comedy, "The Middle".

In her downtime, you’ll find her curled up with a cup of tea, her cats and a great book in Tarzana, California.
Member of:  SFWA,  RWA,  LARA,  FF&P

“You can never get a cup of tea large enough or a book long enough to suit me.”
― C.S. Lewis